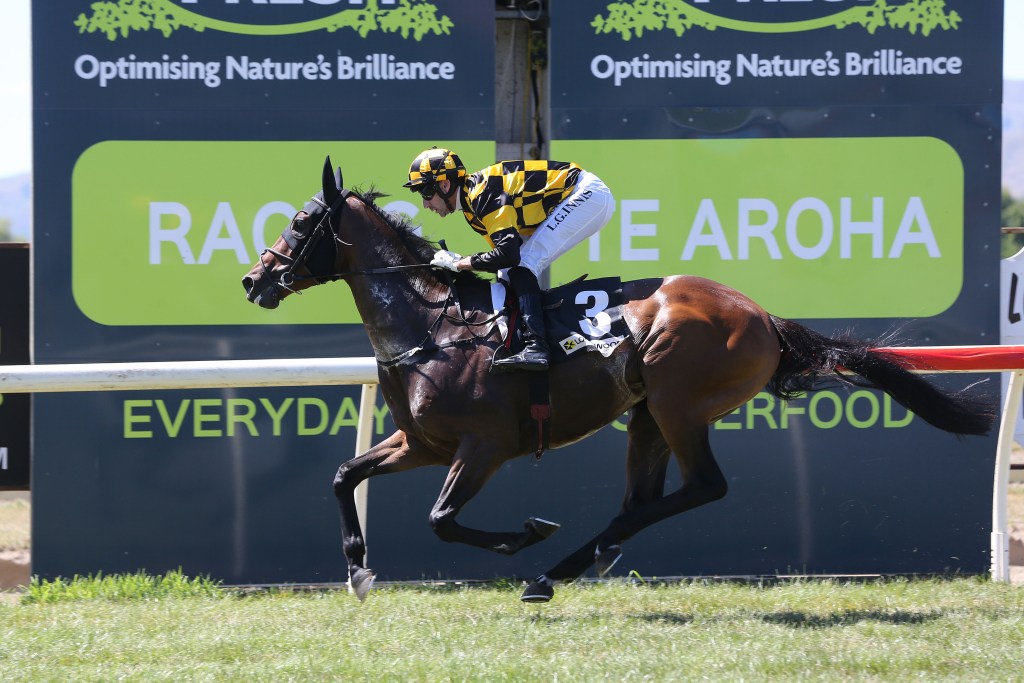 A year ago, Roger James identified a Tavistock juvenile in his barn as the horse that might give him a sixth New Zealand Derby success.

Looking at Pinarello’s victory at Te Aroha on Monday, his judgment may not be too far off.

Having his second start for James and his training partner Robert Wellwood following a debut second, Pinarello showed a fantastic turn of foot for jockey Leith Innes in the straight winning his maiden mile contest by 3 1/2 lengths.

The victory was enough to see Pinarello shortened to $12 with the TAB for the Gr.1 Vodafone New Zealand Derby (2400m) on March 5 – equal second-favourite along with three-time Melbourne spring winner Rhinoceros and Gr.2 Auckland Guineas (1600m) runner-up Field Of Gold. The favourite at $10 is Auckland Guineas winner Dark Destroyer.

“I said a year ago he was my best chance to win another Derby, and I think we’re right on track,” James said.

“He’s a big frail boy, and he’s just started to get his head around life, really.”

He hasn’t decided where Pinarello will run next, wanting to see how he recovers from his maiden victory before deciding.

“We’ve got a lot of options available,” he said. “We might get to the Derby on three runs, or maybe four runs.”

Pinarello was offered at the 2020 New Zealand Bloodstock National Yearling sale by Cambridge Stud but failed to meet his $300,000 reserve and now races in the colours of the stud’s owners, Brendan and Jo Lindsay.

He is out of Zonza, a mare James trained to win the 2013 Ladies Day Vase at Caulfield. She has already made her mark as a broodmare, producing the Gr.2 Matamata Breeders’ Stakes (1200m) winner Vernazza and the Listed Counties Challenge Stakes (1100m) winner Bavella.

James and Wellwood added a second winner at Te Aroha on Monday when Camarosa took out a Rating 65 event over 1600m, with stablemate Avalene finishing third in the same event.

Camarosa had recorded two second-place finishes and six thirds in her first twelve starts and finally broke her maiden at Rotorua on December 28, backing up six days later to win at Te Aroha.

“She’s always promised but she’s a big girl and she’s been weak and always was running good sectionals but could never quite get there,” James said.

“But all of a sudden she’s put things together and I think she’s a filly that could be competitive at black type level in another year.”

Camarosa’s victory took James and Wellwood’s tally for the 2021-22 season to 19, equal to what they recorded the previous season. Six of them have been at black type level – two each to his fine mares Concert Hall, Two Illicit, and Cheaperthandivorce.

Two Illicit has been working on the water treadmill since her Ellerslie effort, when she ran home brilliantly from midfield in what was a very slowly-run race and might still have got at least second had she not struck traffic problems in the straight.

“She ran the quickest 600m of the race when she eventually found some room,” James said.

The Gr.1 Captain Cook Stakes (1600m) winner is likely to seek further top level glory in the Gr.1 Thorndon Mile (1600m) at Trentham on January 29, and possibly the Gr.1 Herbie Dyke Stakes (2000m) at Te Rapa on February 12, though there is a chance she could head to Australia for an autumn campaign as well.

Concert Hall had the same problem of getting too far back in a slowly-run race in the Zabeel Classic, but then showed great class to give 4.5kg to Cheaperthandivorce in the City of Auckland Cup and still won easily.

“I always had planned to run her in both races and it worked out well for her,” James said.

“I’m going to have a chat with the owner (Joan Egan) in the next couple of days and work out what we do from there.”

Cheaperthandivorce has headed to the paddock for a spell after a fruitful spring and early summer campaign which produced victories in the Gr.3 Thompson Handicap (1600m) and the Gr.3 Waikato Cup (2400m).

“She’s had an amazing prep. She’s really stepped up, bigger than I thought when I put her away last season,” he said.

“I’m not sure if she’ll race again this season. We’ll have a look at her in a month and make some decisions at that stage.”– NZ Racing Desk