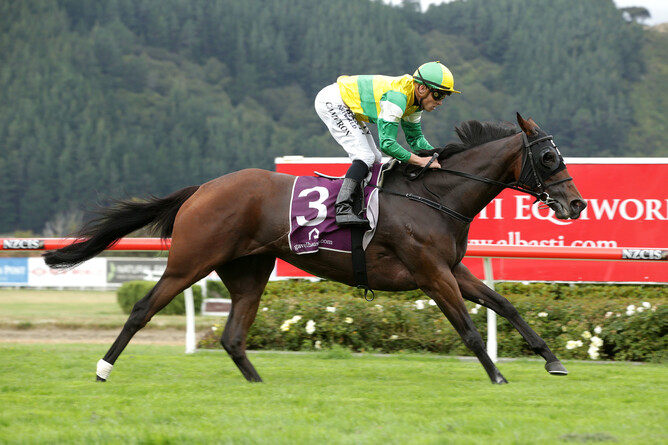 Group Three winner Concert Hall is set to back-up at Ellerslie next Tuesday after running home well for fifth over 1600m at Te Rapa on Labour Day.

“There was a bit of rain around in the late afternoon and the track really loosened up and that meant she really never felt comfortable in the footing,” said Robert Wellwood, who trains the mare in partnership with Roger James.

“Her last 100m was the best, but she didn’t have a lot of room up the straight. We were pleased with the run under the circumstances.”

Concert Hall was nominated for the Gr.2 Coupland’s Bakeries Mile (1600m) at Riccarton next month, but her connections have elected to keep her closer to home.

“We left her in the Coupland’s Mile just to keep our options open,” Wellwood said. “It’s a long trip down there and we have got other plans with her throughout the summer.

“We will look to stay up here and will probably throw a nomination in for the OMF Stakes (Gr.3, 2000m) next Tuesday at Ellerslie and from there potentially onto a Counties Cup (Gr.3, 2100m).

“There are plenty of other nice options over Christmas, but we will take it step-by-step.”

Meanwhile, the Kingsclere team are happy with the progress of Rondinella in Melbourne.

The daughter of Ocean Park has finished runner-up in both the Gr.2 Stocks Stakes (1600m) and Gr.3 Ladies’ Day Vase (1600m) and her trainers are looking forward to stepping her up in distance next week.

“Rondinella is going well,” Wellwood said. “She will be nominated for both the Mackinnon (Gr.1, 2000m) and Matriarch (Gr.2, 2000m), but will more than likely run in the Matriarch.

“We are pretty proud to see her competing so well over a mile there, although it is well short of her best.

“She is very well and we are looking forward to stepping her up over 2000m.”