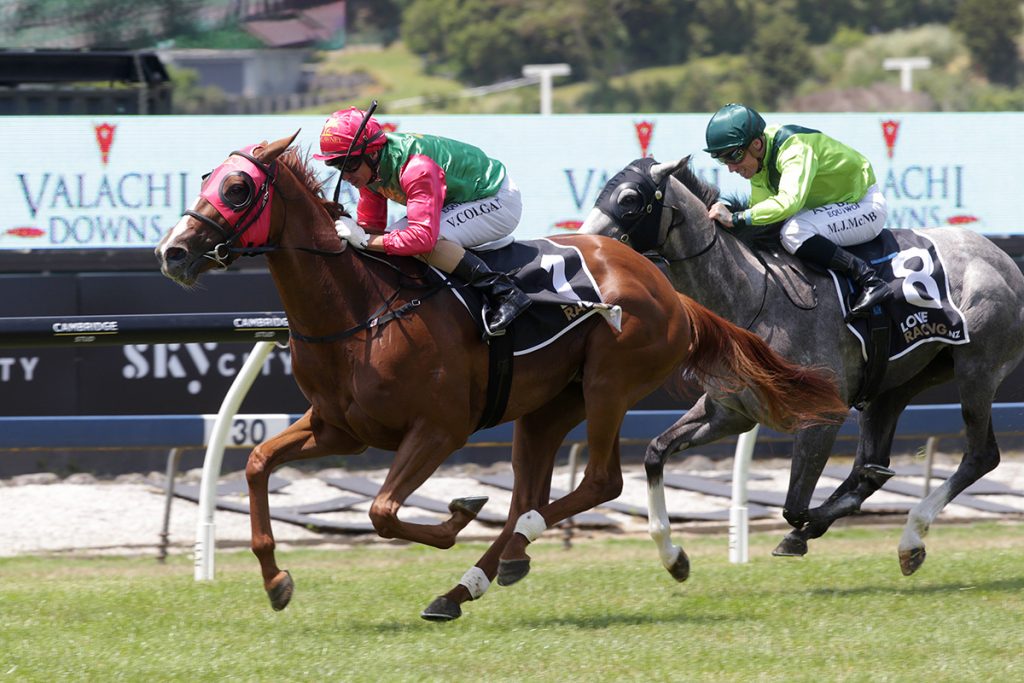 Two Illicit’s (NZ) (Jimmy Choux) perceived lack of commercial appeal put a stop to her being offered through the sales ring as a yearling, but her victory in the Gr.2 Valachi Downs Royal Stakes (2000m) at Ellerslie on Wednesday has certainly changed that fate for her future progeny.

The Roger James and Robert Wellwood-trained filly took her tally to three wins and two placings from just five starts, including victory in the Listed Trevor Eagle Memorial 3YO (1500m) and a last start runner-up effort behind Jennifer Eccles (NZ) (Rip Van Winkle) in the Gr.2 Eight Carat Classic (1600m) at Ellerslie on Boxing Day.

The daughter of Jimmy Choux was duly backed into $1.90 favouritism on Wednesday by punters and she didn’t disappoint, going on to win by 1-/1/4 lengths over Bergamot (NZ) (Sweet Orange), with Lilikoi (NZ) (Charm Spirit) three-quarters of a length back in third.

“They did dawdle, but at the half-mile the three-wide train started so I tacked onto it,” jockey Vinnie Colgan said. “We got to the front a little soon because of it, but she showed great stamina and kept going to the line.

“She really deserved to win today. She was a little bit unlucky on Boxing Day, but Roger and Rob have had her in good nick and Emily Farr does all the work on her. We had the perfect run today.”

Breeder and part-owner Brent Taylor, of Trelawney Stud, was delighted with the win and praised the efforts of her trainers in the aftermath of the race.

“It’s fantastic and a great testament to Roger and Robert, they have done a wonderful job, as well as the team back in the stables, to take this filly four times to Ellerslie for three wins and a second. She loves it here and we love coming here,” he said.

Taylor was thrilled to get the victory with a home-bred filly and said it was only her lack of commercial appeal that kept her from being offered through the sales ring as a yearling.

“We bought a share in Jimmy Choux when he first went to stud and we bought the dam Gemini at the sales and raced her,” Taylor said.

“She had a couple of issues and didn’t show her best. We bred a couple of foals out of her and traded her, but kept this filly because she was a beautiful filly and at the time, commercially she wasn’t going to be worth a lot.

“We just put her in the racing team to see what happens and today happened, which is fantastic.”

An Oaks tilt is now on the cards for Two Illicit, but Taylor said her connections have yet to decide what side of the Tasman that would be.

“She is only three once, so we will find out.”