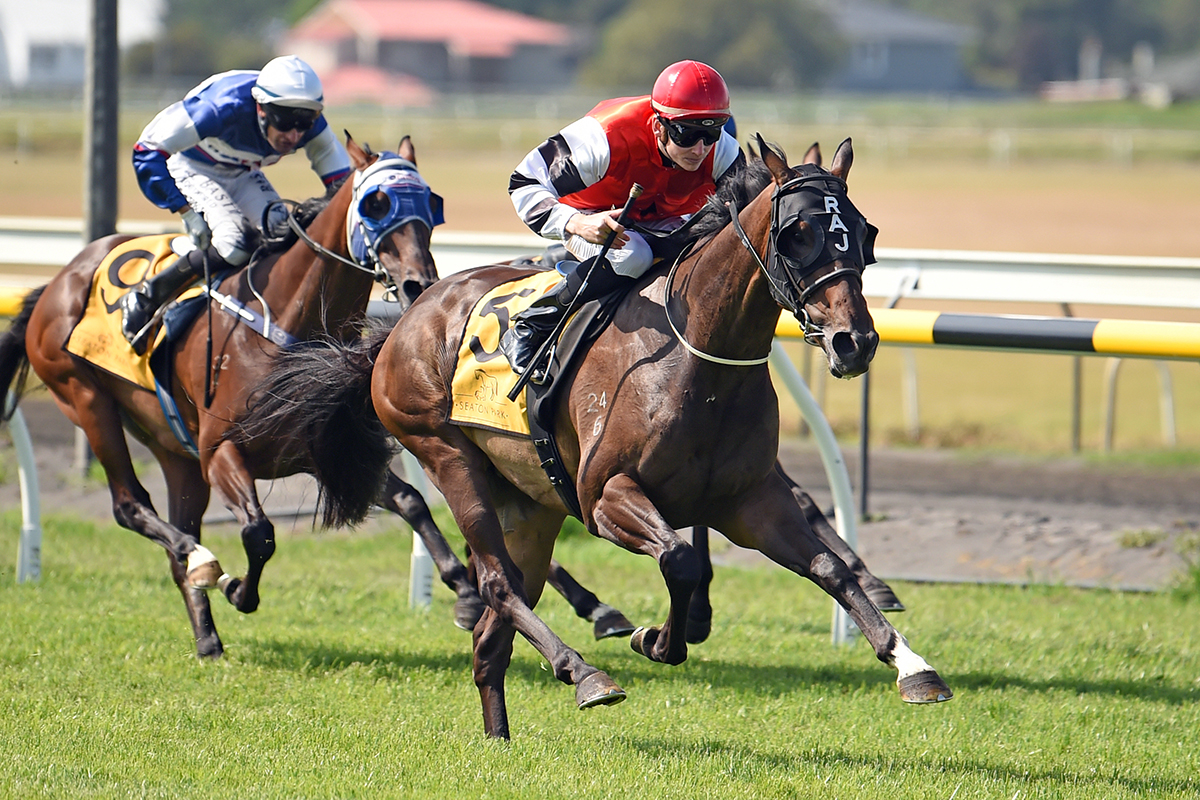 Under the watchful eye of a trainer dubbed the ‘Derby King’, up-and-comer Reggiewood (NZ) (Redwood) has emerged as an exciting contender for the Gr.1 Vodafone New Zealand Derby (2400m) at Ellerslie on February 29.

Now training in partnership with Robert Wellwood, James is hoping for another shot at the Ellerslie classic later this month with the exciting Reggiewood.

Sixth on debut at Hastings in May of last year, the Redwood gelding made giant strides over a winter and spring break and returned to action with a second placing at New Plymouth on December 27.

He cleared maiden grade by almost four lengths over 1950m at Rotorua on January 15, and then on Saturday at New Plymouth he produced an explosive finish to win the Devon Hotel 2000 by a widening margin of three lengths.

“I was very happy with his performance at New Plymouth yesterday,” James said. “He’s a highly promising staying three-year-old, and he’s improving significantly with every start.

“The Derby seems to be the natural progression for him now, and I don’t think the mile and a half (2400m) will pose him any problems. It’s an exciting position to be in.

“We’ll just see how he pulls up before deciding on a plan between now and the Derby. We may not need to give him another run at all, but if we do, the obvious one will be the Avondale Guineas (Gr.2, 2100m) at Ellerslie on February 15.”

The TAB reacted to Saturday’s win by trimming Reggiewood to a quote of $14 for the New Zealand Derby. The only runners ahead of him are Dragon Leap ($2.50), Travelling Light ($5), Sherwood Forest ($8), Harlech and Scorpz (both $10).

Reggiewood’s excited owner-breeder is Western Australian Norm Dennis, who has been a long-time industry participant on both sides of the Tasman. He and his partner Jane Webbware own shares in Reggiewood’s sire, Westbury Stud stallion Redwood.

Interestingly, Reggiewood carries colours that are part of Australasian racing folklore through the deeds of the legendary Phar Lap.

“There’s no family connection or anything like that, but the owner was keen to use the colours, applied for them in New Zealand and got them,” James said. “It’s another little point of interest for this horse.”

Meanwhile, James was delighted with the first-up run by his multiple Group One placegetter Rondinella in the Gr.2 Westbury Classic (1400m) at Ellerslie on January 25. The Ocean Park mare finished third, beaten by half a length and a long head by Kiwi Ida and Volpe Veloce.

“It was a very good performance first-up,” James said. “If they’d run another 50 metres, she probably would have won the race.”

The Gr.1 New Zealand Stakes (2000m) at Ellerslie on March 7 has been identified as a likely first major target of Rondinella’s campaign, but she is likely to have another run beforehand.

“It’s most likely she’ll run in the Kaimai Stakes (Listed, 2000m) at Matamata on February 22,” James said. “But there is a rough chance we might instead have a go at the Gr.1 Haunui Farm WFA Classic (1600m) at Otaki on the same day.”

Meanwhile, last-start Gr.2 Royal Stakes (2000m) winner Two Illicit had an exhibition gallop between races at Matamata on Sunday. She worked in partnership with Group One winner Travelling Light, and the pair strode out stylishly down the straight with Two Illicit finishing narrowly ahead. They were clocked in 1:13 for 1200m, with the last 600m in 35.1.

James, Wellwood and jockey Vinnie Colgan were all very pleased with Two Illicit’s work. She will lined up at Te Rapa next Saturday, with a decision to be made in the coming days whether it will be in the Gr.2 David & Karyn Ellis Fillies’ Classic (2000m), the Gr.2 Waikato Guineas (2000m) or the Gr.1 Herbie Dyke Stakes (2000m). Beyond that, she may join her stablemate Reggiewood in the line-up for the Derby.