Partnership in search of breakthrough Group One 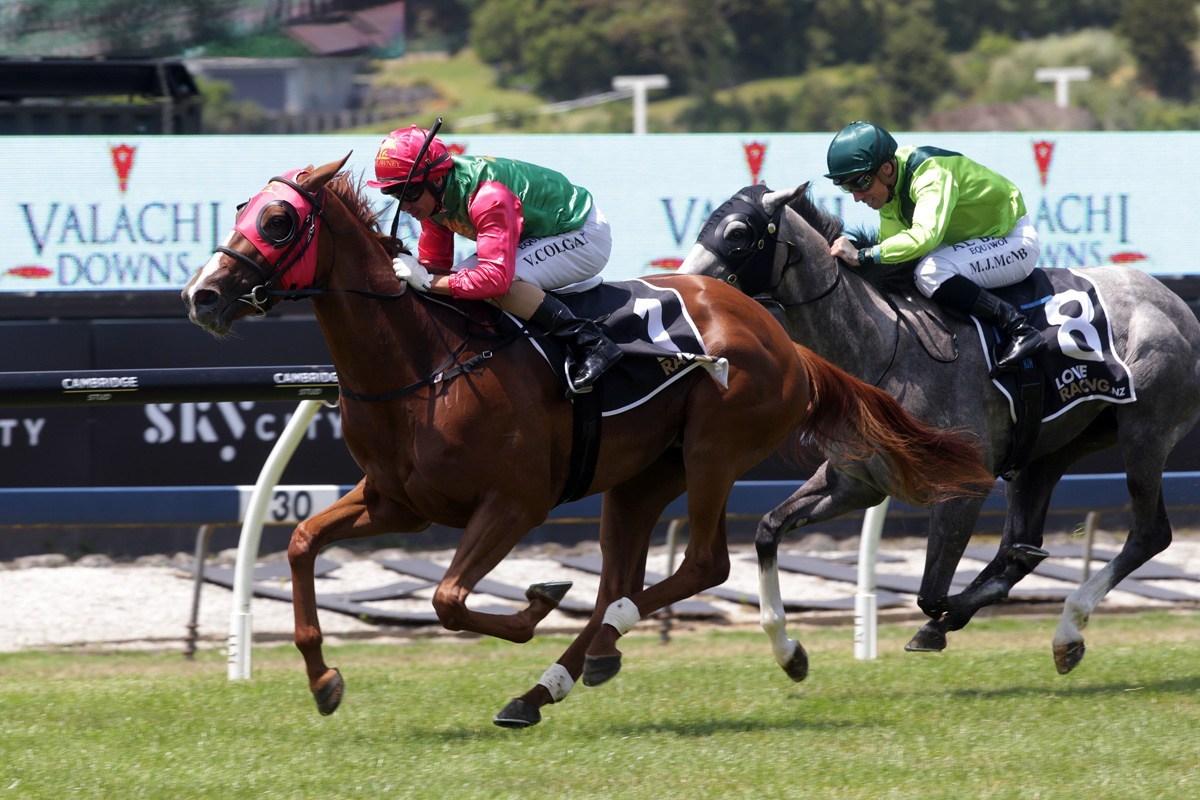 The Roger James and Robert Wellwood-trained Two Illicit (NZ) (Jimmy Choux) has hardly put a foot wrong in her eight-start career to date, but the immensely talented four-year-old will face her toughest test to date when she contests Saturday’s star-studded Gr.1 Windsor Park Plate (1600m) at Hastings.

Runner-up in last season’s Gr.1 New Zealand Derby (2400m), Two Illicit was a brilliant fresh-up winner at Ellerslie over 1400m and James is pleased with his multiple Group Two winner who is the $6 third favourite for Saturday’s contest.

“She has ticked every box since that run and I am super happy with her,” James said.

“I can see there being a lot of pressure early, a lot of the speed coming from the outside and I just hope we get the position midfield-ish one off and get into a nice rhythm with a good pace into the race and get a clear run from the 500.”

Sporting the colours of the Taylor family’s Trelawney Stud, who bred the daughter of Jimmy Choux, Two Illicit has won five of her eight starts and was placed on the other three occasions.

James makes no secret of the esteem in which he holds the lightly-raced mare, rating her the best horse he has trained since multiple Group One winner Silent Achiever.

“She is right up there, she is yet to prove it at Group One level but I think it is only a matter of time. She is a very good mare, make no mistake,” James said.

“There is no doubt 2000m will suit her better, but she is too good not to go a big race tomorrow in my opinion.”

It is unlikely Two Illicit will be seen across the Tasman this spring, with the Gr.1 Livamol Classic (2040m) on the final day of the Hawke’s Bay carnival the likely target.

“You never say never (to travelling to Australia) but I had a discussion with her owners and we have decided to give her a lighter spring. That involved the last two legs at Hastings.”

With seven Group One winners and a host of up and coming stars in the Windsor Park Plate, James has total respect for the opposition.

“It is a cracking field and there is a host of chances. It is probably one of the better fields they have put together for that race,” he said.

“It will take a good effort from anyone to win it but I am certain we can be competitive.”

While naturally hoping to be back in the Group One limelight, James would derive huge satisfaction from sharing it with his 26-year-old training partner Robert Wellwood, who has joined forces with the Cambridge trainer over the past two seasons and is looking to land his maiden Group One.

“It would be extremely satisfying for me and it goes without saying it would be a huge highlight for Robert,” James said.

“He is only a young guy and we have had several Group One placings since we have been in partnership but it would be special to crack it down there because he is a Hawke’s Bay boy. Any Group One is going to mean a lot, but it would be all that more special in his home territory.”

James and Wellwood will also saddle Hypnos (NZ) (Reliable Man) in the LI Redshaw Memorial (1200m), with the stakes winning five-year-old being aimed at the Gr.2 16th Coupland’s Bakeries Mile (1600m) at Riccarton on November 11.

“1200m is a bit short for him but he is a stronger horse this preparation and his whole demeanour is different,” James said.

“He is very free in his action and his work has been lovely so I am looking forward to seeing him run. I am not going there with the expectation of him winning but I think he can run a big race.”

The Cambridge trainers will also be represented by Monlula (NZ) (He’s Remarkable) fresh-up over 1400m at Ellerslie on Sunday, the first time back at the races since running a good fifth in the New Zealand Derby.

“He has come back a lot stronger but he is a very relaxed customer at home and you never get much of a line on him,” James said.

“I think 1400m will be too short for him first up. Once he gets to a mile or further I think he might be a Cups horse in the making.”