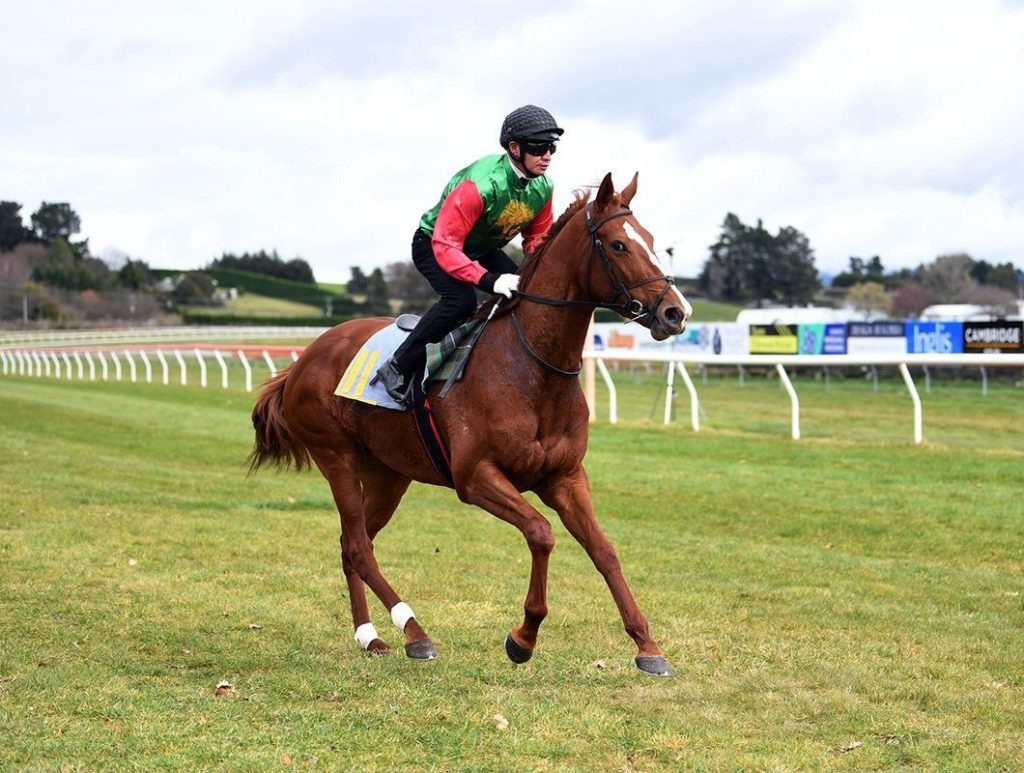 The class of Red Badge Sprint (Gr 3, 1400m) winner Two Illicit (Jimmy Choux) was evident on Saturday when she moved out of traffic from the 300 metres, found clear running and then joined in half way down the straight.

In a few bounds from the 150 metres she outclassed her opponents, and showed the sort of form that two seasons ago saw her among the top three-year-olds of her crop.

The Red Badge was her fourth stakes win and sixth career win in just 14 starts. At three, she scored a Listed race at Ellerslie in the spring. Returning to Ellerslie in January she bagged the Royal Stakes (Gr 2, 2000m) and followed that up next start when taking on and beating the boys in the Waikato Guineas (Gr 2, 2000m) at Te Rapa.

Three weeks later she finished a solid and clear second in the New Zealand Derby (Gr 1, 2400m) before being put aside.

Last season at four she won first-up at Ellerslie then headed to Hastings where she ran fourth in the Windsor Park Plate (Gr 1, 1600m) before finishing fifth in last year’s Livamol Classic.

Rested until last autumn, she was a freshup third before a Queensland campaign that resulted in two unplaced efforts, where the mare was below her best and found the tracks too firm.

Part-owner and breeder, Brent Taylor of Trelawney Stud, explains: “The transition from three-year-old filly to four-year-old mare can often be a difficult one. A good example is Jennifer Eccles who was top class at three but found the next season a challenge. Our own Loire found the transition a challenge also. Two Illicit had some issues too but with those behind her we can only hope that she continues and proves her three-year-old form.

“An old adage is that class is permanent and form is temporary and we know she has class,” said Taylor.

Co-trainer Robert Wellwood also commented: “If we can keep her right, she is a very talented horse who showed us that as a three-year-old. It’s just good to see her back in the right order and winning nicely. She has just had a few niggles but hopefully we have ironed those out now and we can keep her in this order as we will win some nice races with her.”

Twin Town’s race career of four wins included one in Adelaide while her dam, Contiguous (Danzig), never raced. However, the latter was certainly well-related being a three-quarter or half-sister to no less than eight stakes winners. One of those is Epsom Oaks (Gr 1, 1m 4f) winner Reams Of Verse (Nureyev), the grandam of New Zealand-based sire Zacinto (Dansili).

Her first foal, Two Illicit’s dam Gemini (Tale Of The Cat), was purchased for the significant sum of $210,000 by Trelawney Stud from Cambridge Stud’s draft of the 2011 Karaka Premier Yearling Sale.

Trelawney’s Brent Taylor said: “Gemini was a nice type and by a sire I have a lot of time for, in Tale Of The Cat. She showed some ability. We sold a nice Ocean Park filly out of her then bred Two Illicit. Being by Jimmy Choux she would not have been popular commercially so we decided to keep her to race as she was the best style of foal that Gemini had produced thus far.”

The ups and downs of breeding definitely apply to Gemini. Her racing career resulted in several placed efforts before she retired to stud in 2013. Trelawney bred three fillies, the third being Two Illicit, which the stud retained. The stud then sold the mare in 2017 for $10,000 in foal to Showcasing (Oasis Dream).

Taylor added: “Sometimes, tough decisions must be made and Gemini wasn’t cutting it so we had to move on. That’s business. Keeping Two Illicit though, was because we race horses so we gave her a chance. Gemini’s half-brother has since added to the family and we have a future broodmare.”

Later that year, Gemini’s half-brother, Easy Eddie (Super Easy) broke his maiden. In March of 2019 he captured the Maurice McCarten Stakes (Gr 3, 1100m) and earned more than $600,000 in prize-money from eight wins and a further 12 places in 34 starts. In the October Two Illicit also got her race career off to a great start by winning at her second start at Ellerslie.

So, in a little over two years after Gemini’s sale the family’s fortunes really turned around. Twin Town is still breeding and last year produced a colt to Turn Me Loose (Iffraaj). Sadly, Gemini’s fate was not so positive. She died in 2019 after producing five successive foals.

The high hopes relating to Gemini’s purchase, followed by the decision to sell, is reflective of the realities of breeding. Without a doubt, Trelawney’s decision to retain Two Illicit is one that they will savour. She is a talented mare and will be part of Trelawney’s history for years to come.

Taylor summed up: “She likes Ellerslie so a race like the Zabeel Classic is one we might shoot for. She is not nominated for Riccarton so we’ll keep her in the north. We also might look at the Captain Cook at Trentham in December.”