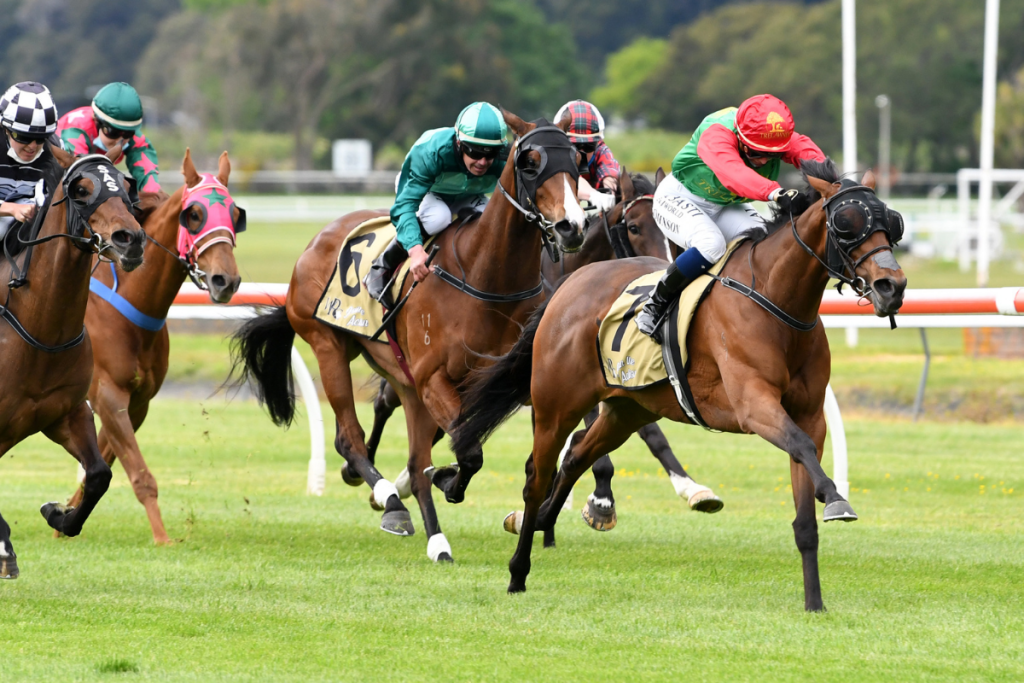 Royally bred mare Cheaperthandivorce picked up the first stakes success of her burgeoning career when she finished powerfully in the home straight to claim the Gr.3 Gee & Hickton Funeral Directors Thompson Handicap (1600m) at Trentham on Sunday.

The four-year-old daughter of super sire Savabeel and Gr.1 New Zealand Oaks (2400m) winner Boundless had scored a decisive fresh-up victory over the same distance at Hastings earlier in the month, however there were some doubts that she could cope with the Slow9 track conditions on offer at Trentham.

Those fears were quickly put to bed as rider Danielle Johnson had the mare settled beautifully in midfield before easing into the race at the 600m.

Taken to the middle of the track Cheaperthandivorce sprinted quickly with the well favoured Justaskme and the pair set down to fight out the finish, with the Roger James and Robert Wellwood-trained mare proving too strong over the closing stages.

James had been happy with the mare leading into the race but began to have some doubts creep in once he found out about the wetter than predicted underfoot conditions.

“I was pretty confident until I knew how bad the track was,” he said.

“She had never struck a surface like that, even at the trials, so you never know how they will go until they get out there on it.

“Some handle it and some don’t so I was hopeful more than confident.

“She ended up travelling well and finished her race off very strongly, so that was very pleasing to see.”

James believes the mare has what it takes to tackle some of the better staying events over the summer after strengthening up nicely during her winter break.

“She is very lightly-framed but has matured well and we have also changed her gear around a little, which has helped with her development.

“She looked nicely placed today and even with the win she should still get into races like the Counties or Avondale Cup with a nice light weight.”

Cheaperthandivorce has now won three of her 8 starts, with today’s victory adding significant value to any future breeding career.

The four-year-old is the first filly out of Boundless and is raced by her breeders Brent, Cherry and Faith Taylor of Trelawney Stud.

The amusing moniker originates from a trip to the Inglis Broodmare Sale in 2011 where Boundless was being offered at auction to dissolve her racing partnership.

Cherry Taylor, who retained a share in Boundless after selling her as a yearling, was keen to buy the mare to add to the Trelawney Stud broodmare band.

“Brent (Husband) was at the sales and had been trying to buy a broodmare all day but hadn’t been able to,” Cherry Taylor recalled.

“He went to A$700,000 to get Boundless, which was a lot of money, and as he walked out of the ring someone commented to him that it was a lot to spend on a broodmare and Brent replied with ‘it’s cheaper than divorce’.”

The win continued a good weekend for Trelawney Stud, with the Taylors racing dominant Matamata winner Vamos Bebe, while they will also be represented by Pareanui Bay, second favourite for Monday’s Gr.2 James And Annie Sarten Memorial Stakes (1400m) at Te Rapa.