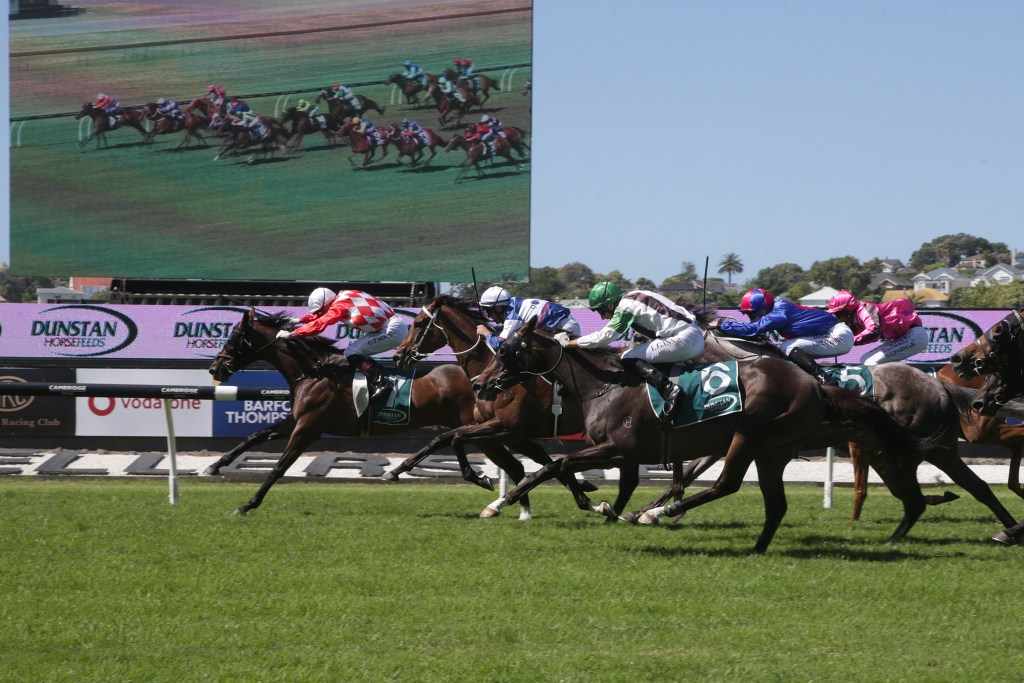 A never say die effort from Dionysus and rider Opie Bosson saw them take out a fabulous victory in the Dunstan Feeds Stayers Championship Final (2400m) at Ellerslie.

After a gritty second placing over 2200m on Boxing Day in a qualifying event for today’s final, the four-year-old son of Ocean Park looked to be a strong chance to go one better until he drew an outside barrier (11).

With Bosson jumping aboard the Roger James and Robert Wellwood-trained stayer, punters rallied behind Dionysus who ended up starting the $4.30 favourite in an even contest.

Bosson sent Dionysus forward from barrier rise and by the turn out of the straight had him relaxed outside pacemaker Lowry, who set up a muddling pace.

Bosson shot Dionysus to the front shortly after straightening and gamely fought off all the challengers to win by half a length from the fast-finishing Rapid Falls and Margaret Jean.

Wellwood was thrilled with the victory and excited about what lay ahead for the progressive stayer.

“I’m pretty excited about this horse, as he ran on Boxing Day and he is still a bit weak and fragile,” he said.

“He was on the back-up today and we didn’t really do a lot with him and he got the job done.

“In time he could be a very nice staying horse.”

James and Wellwood had earlier provided the quinella in the Gr.3 SKYCITY City Of Auckland Cup (2400m) with Concert Hall and Cheaperthandivorce, with Wellwood keen to see Dionysus step up once Concert Hall retires.

“Concert Hall probably heads to the broodmare paddock next season, so we need someone to follow her up,” he said.

“He’s (Dionysus) done a really good job today, after doing some work early and he let down very strongly, so we’re looking forward to him in another year.

“A race like the Auckland Cup (Gr.1, 3200m) is probably too soon for him this year, but we will see how he comes through this before making any decisions.”

Bred by Sir Patrick and Lady Hogan from the Tavistock mare La Quinta, Dionysus is raced by Wellington-based couple Fran and Ron Dixon after James and Wellwood purchased him for $45,000 out of the Cambridge Stud Book 1 draft at the Karaka Yearling sale in 2019.

A half-sister to Dionysus by Embellish will feature as Lot 909 from the Epona Park draft during the 2022 New Zealand Bloodstock National Yearling Sale at Karaka that commences on March 10. -NZ Racing Desk