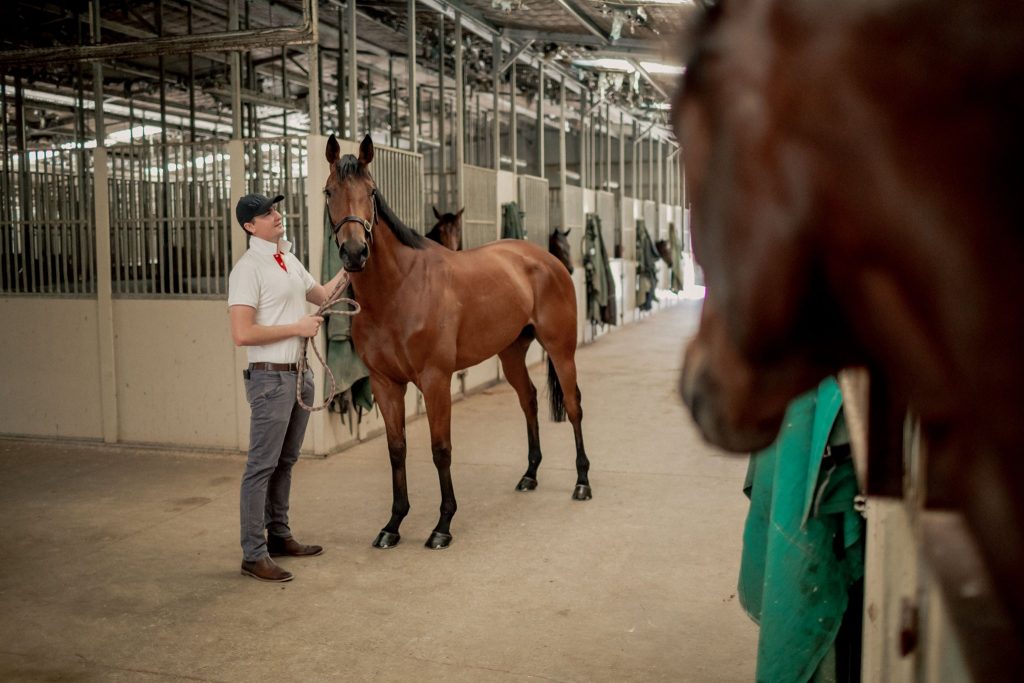 Rondinella receiving a look of adoration from co-trainer Robert Wellwood

Cambridge trainer Roger James had a tough choice to make heading into Caulfield with Rondinella (NZ) (Ocean Park) on Wednesday.

The experienced horseman, who trains in partnership with Robert Wellwood, was weighing up between a start in the Gr.3 Ladies’ Day Vase (1600m) or the Gr.3 Coongy Cup (2000m).

“I have decided to have a throw at the stumps again at a mile,” he said.

“She is beautifully placed in the Ladies’ Day Vase. She is the highest rated horse (107) in the race and she’s on the bottom weight through the conditions of the race.

“The topweight came out in the Coongy and we were going to end up second topweight with 57.5kg. There is no doubt that 2000m is her best distance, but I have been mindful of trying to keep her very fresh.”

Rondinella heads into the race off the back of her last start runner-up performance in the Gr.2 Stocks Stakes (1600m), which delighted her connections.

“I thought it was a really good run. Nash (Rawiller, jockey) was pretty adamant that he could have won it had he got clear half a dozen strides earlier,” James said.

Rawiller has retained the ride for Wednesday, but as a result Rondinella will be burdened with more weight than carded.

“It comes at a cost because we have got to go up half a kilo,” James said. “I just thought she was so well placed in a race like that, that I was prepared to do that.

“I would think that the majority of racing from hereon in will be at weight-for-age anyway, so I was happy to do that on this occasion.”

James is pleased with his mare heading into the race and believes she will be very competitive based on the feedback from handicapper Greg Carpenter.

“I have spoken to the handicapper, Greg Carpenter, at length this morning,” he said. “He was of the opinion that it was very winnable for her. He knows more about it than I do, so I hope he is correct.”

If Rondinella impresses on Wednesday she could be set on a path to clash with compatriot Melody Belle in the Gr.1 Empire Rose Stakes (1600m) at Flemington next month.

“I have a lot of options,” James said. “If she were to win, and win well, we might look at the Group One mares’ mile with her on the first day (of the Melbourne Cup carnival).