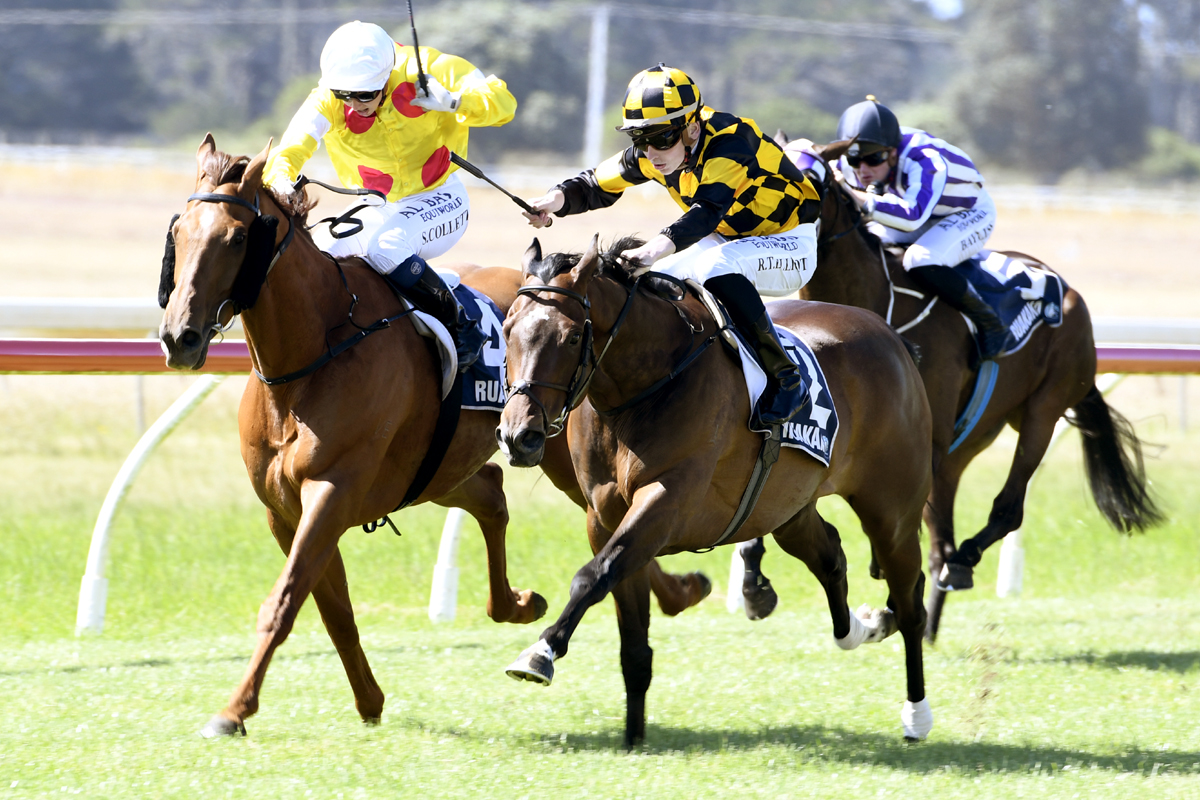 Sherrif (outside) will contest the Anuka Smoker Handicap (1600m) at Trentham on Saturday. Photo: Race Images

Group Three winner Sherrif (NZ) (High Chaparral) will be looking to add another victory to his tally at Trentham on Saturday when he contests the Anuka Smoker Handicap (1600m).

The son of High Chaparral pleased his connections when winning fresh-up over 1400m at New Plymouth last month and Robert Wellwood, who trains in partnership with Roger James, said the gelding favours his races spaced.

“It was a nice win and you would hope he is going at least as well he was fresh-up.

“He is well, he has trained on nicely. It has suited him to have a month between runs coming back from a long spell.”

Sherrif will tackle a small but select field on Saturday, with his competition including stakes winners Toms (NZ) (Towkay) and Wait A Sec (NZ) (Postponed).

“It is a nice enough race and he doesn’t get in at quite his true handicap, but we are happy with the horse and he does have a lot of ability,” Wellwood said.

“We will see how he goes, if he won impressively on the weekend it opens up a few options, whether that be domestic or over the ditch.

“We will just take it step-by-step. He has got to win and do it nicely to start thinking like that.”

Further north, Wellwood and James will be on course at Ellerslie where they will be hoping Group One performer Rondinella (NZ) (Ocean Park) can break through for her first victory at elite level in the Gr.1 Bonecrusher New Zealand Stakes (2000m).

The daughter of Ocean Park finished third behind Melody Belle (NZ) (Commands) and Danzdanzdance (Mastercraftsman) in the race last year on a Heavy10 surface before she went on to place in the Gr.1 Tancred Stakes (2400m) and finish fourth in the Gr.1 Sydney Cup (3200m).

Rondinella heads into the race off the back of a disappointing unplaced run in the Gr.1 Haunui Farm WFA Group One Classic (1600m) at Otaki last month.

“It was a bit of a headscratcher last time, she didn’t go well at all. It is going to suit her getting back to Ellerslie, a track she has performed well at before. We have just go to put that last run behind us and forget about it.”

Rondinella has drawn well in barrier three and Wellwood said the 2000m distance will be ideal.

“She certainly starts to excel up over 2000m-plus. At her best she is very competitive in that race, we have just got to hope that she puts her best foot forward on Saturday.”

While she went on to impress in Sydney in the autumn last year, Wellwood said she would have to perform well on Saturday in order to warrant a trip across the Tasman.

“She is one we are going to have to wait and see with a little bit. If she won she would be heading over for the Sydney autumn carnival.”

Last start winner Flomiline will contest the Fasttrack Insurance 1600 where she could be joined by stablemate Elate who is also accepted for the Royal Descent Stakes (1600m).

“We are not sure yet which race we will head to with Elate,” Wellwood said. “We were preferring to run in the 72, but she has drawn well in the Royal Descent (3) and not in the 72 (11), so that has made our decision a little bit harder.

“She is going nicely and she is not going to show her true colours until she gets up over 2000m, but it is a step in the right direction.”

Wellwood is pleased with Flomiline ahead of Saturday and is hoping she can continue her winning ways.

“She is going really well. She is a full-sister to Monlula who ran in the Derby, so the breed is going nicely for us at the moment and her work is as good as what you could hope for on Tuesday, so we are pretty happy with her heading into the weekend.”