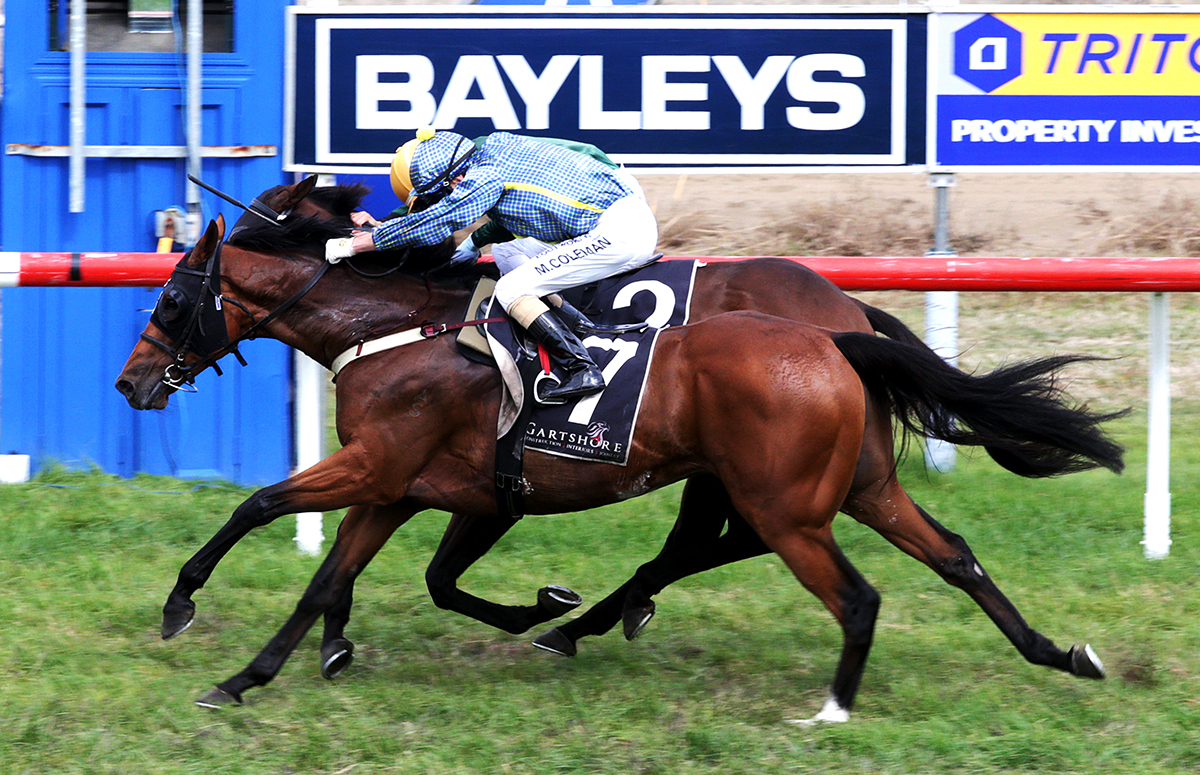 London Banker (outside) gets in the deciding stride at Tauranga Photo: Trish Dunell

Promising stayer London Banker (NZ) (Tavistock) took every centimetre of the 2100m distance of Saturday’s J Swap Contractors Bay Of Plenty Cup to get his nose in front as he prevailed in a thrilling finish to the middle-distance contest.

Searching for a hattrick of wins after success over the same distance at Te Teko and Ellerslie at his last two starts, the Roger James and Robert Wellwood-prepared Tavistock four-year-old had his many supporters on the edge of their seats as he waged a home straight war with the aptly named Bully Boy.

Co-trainer Wellwood was quick to admit he wasn’t quite sure if his charge had got in the deciding stride as the pair hit the line locked together.

“I think it was only at the post that he got his nose in front,” he said.

“He’s still immature, quite babyish and doing a bit wrong but he’s strung three together now and is a horse on the way up.”

Owned by Queensland-based couple Ron and Judy Wanless, who have been long term supporters of the Cambridge stable, London Banker was purchased by James for $100,000 from the Kilgravin Lodge draft at the 2017 Premier Yearling Sale at Karaka.

His grand-dam, dual Group Three winner Palos Verdes, is the dam of four-time Group One winner El Segundo with Wellwood keen to add further black-type to the family for his owners.

“We think he will have one more start in this campaign which will be in the Hawke’s Bay Cup (Listed, 2200m) next month,” he said.

“He will go for a spell after that but on what he has shown us so far he could be a very exciting horse if he can keep improving like he has.

“We haven’t really looked too far ahead but with his owners being Australian-based we could look at something over there but that hasn’t been discussed yet.”

With the tracks starting to soften Wellwood and James will be concentrating on the education of the younger members of their team over the next couple of months although there is still plenty to look forward to in the immediate future including star three-year-old Two Illicit, who heads to Sydney on Tuesday.

“Two Illicit is booked to fly out on Tuesday at this stage as she heads to the Vinery Stud Stakes (Gr.1, 2000m) on Saturday and then the Australian Oaks (Gr.1 2400m) in a fortnight,” Wellwood said.

“She galloped on Saturday and her work was terrific, some of her best, so she has bounced through her last run really well after a week of R&R and some work on the water walker.

“We mainly have a very young team at the moment with a lot of two-year-olds in work although they are not really two-year-old types.

“We are really just doing a lot of homework there in preparation for next season.

“We did have a lovely Savabeel filly win at the trials at Matamata during the week, she is a real three-year-old type although we may look to step her out for one run before we put her aside.”

The stable will be represented in two of the feature events at the Awapuni meeting next Saturday with last start Trentham winner Sherrif heading to the Listed Bramco Granite & Marble Flying Handicap (1400m) while Gr.1 New Zealand Derby fifth placegetter Monlula will contest the Gr.3 Higgins Concrete Manawatu Classic (2000m).

Monlula could be joined by fellow New Zealand Derby contestant Reggiewood, who finished alongside his stablemate in sixth in the event, however he is currently under offer to Hong Kong interests and will not take his place if the sale goes through.