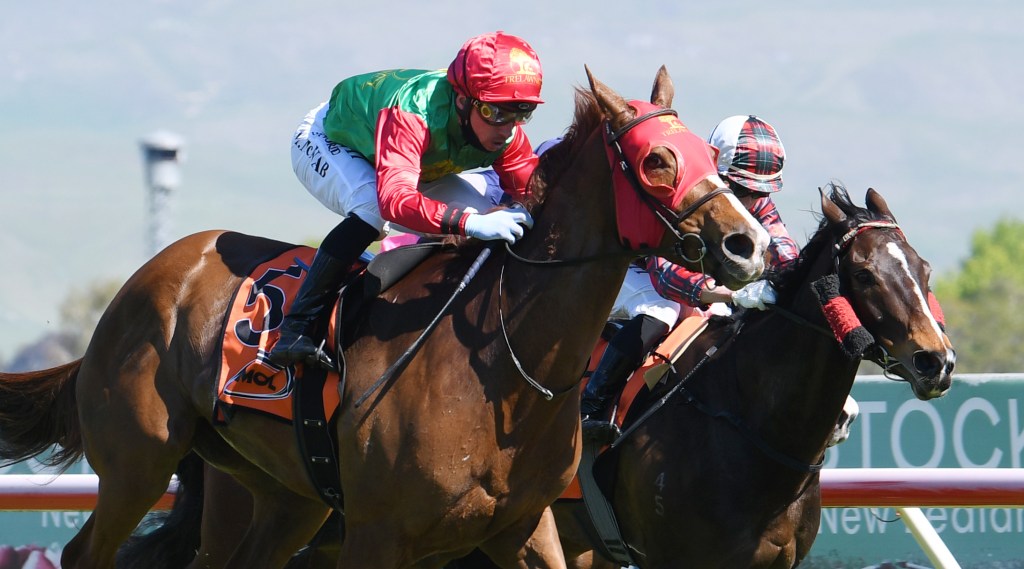 Roger James and Robert Wellwood believe there is a positive sense of timing around Two Illicit’s bid for Group One glory at Trentham on Saturday.

The Cambridge trainers are confident the daughter of Jimmy Choux will relish the step up in distance on a roomy track in the Rydges Wellington Captain Cook Stakes (1600m) after two fine lead-up outings.

Two Illicit successfully resumed in the Gr.3 Red Badge Spring Sprint (1400m) at Hastings before she rushed home for third in the Gr.2 Auckland Thoroughbred Breeders’ Stakes (1400m) behind Showoroses and Our Alley Cat.

“She has been set for this race and then the Zabeel Classic (Gr.1, 2000m) and she is spot on for Trentham,” Wellwood said.

“Fresh-up, she ran a really smart 1400m and second-up we always thought the 1400m would be a touch short for her, but it was a good run and it served its purpose.

“She ran super well and hit the line strongly and was beaten by two specialist 1400m horses. We were very happy and it did look like a mile next up would suit her down to the ground.”

The Trelawney Stud-bred and raced Two Illicit has breezed through her latest outing and will strip at her peak for Trentham.

“We are really happy with the way she has come through it and her regular work rider thinks she feels better now than she did heading into the Breeders’ Stakes,” Wellwood said.

“Vinnie (Colgan) galloped her on Tuesday morning and he was very happy so we’ll go to Trentham with all guns blazing.”

She will be accompanied south by Assertive Nature, who will contest the Concept Security Premier (1400m) off the back of a maiden success at New Plymouth at her third appearance.

“She’s a nice mare with a good future. She’s still learning the game, but her work has been good,” Wellwood said.

“She worked with Two Illicit and considering she was working with a horse heading to a Group One we had to be pretty happy.”

Meanwhile, Concert Hall has made good progress since her narrow defeat in the Gr.3 Balmerino Stakes (2000m) at Te Rapa.

“She will head to the Cal Isuzu Stakes (Gr.2, 1600m) on Waikato Cup Day. It’s not ideal running her at a distance short of her best, but she will be heading to the Zabeel Classic to defend her crown on Boxing Day and this race is the best stepping stone to that,” Wellwood said.

Also set for Te Rapa on Saturday week is Cheaperthandivorce, who won the Gr.3 Thompson Handicap (1600m) in October before she finished third in the Gr.3 Counties Cup (2100m).

“We probably expected her to win, although she ran really well and maybe lacked a bit of ringcraft and didn’t see the other horses coming,” Wellwood said.

“She has come through it well and will head to the Waikato Cup (Gr.3, 2400m) and be ridden a little more quietly and give her something to chase.

Plans have yet to be locked in for the consistent Hypnos, who was runner-up in the Gr.2 Eagle Technology Stakes (1600m) at Te Aroha last time out

“He was solid and the hard track didn’t help him. It was a super run, he feels his joints a bit and there’s a few options for him, but we haven’t confirmed anything yet,” Wellwood said. – NZ Racing Desk